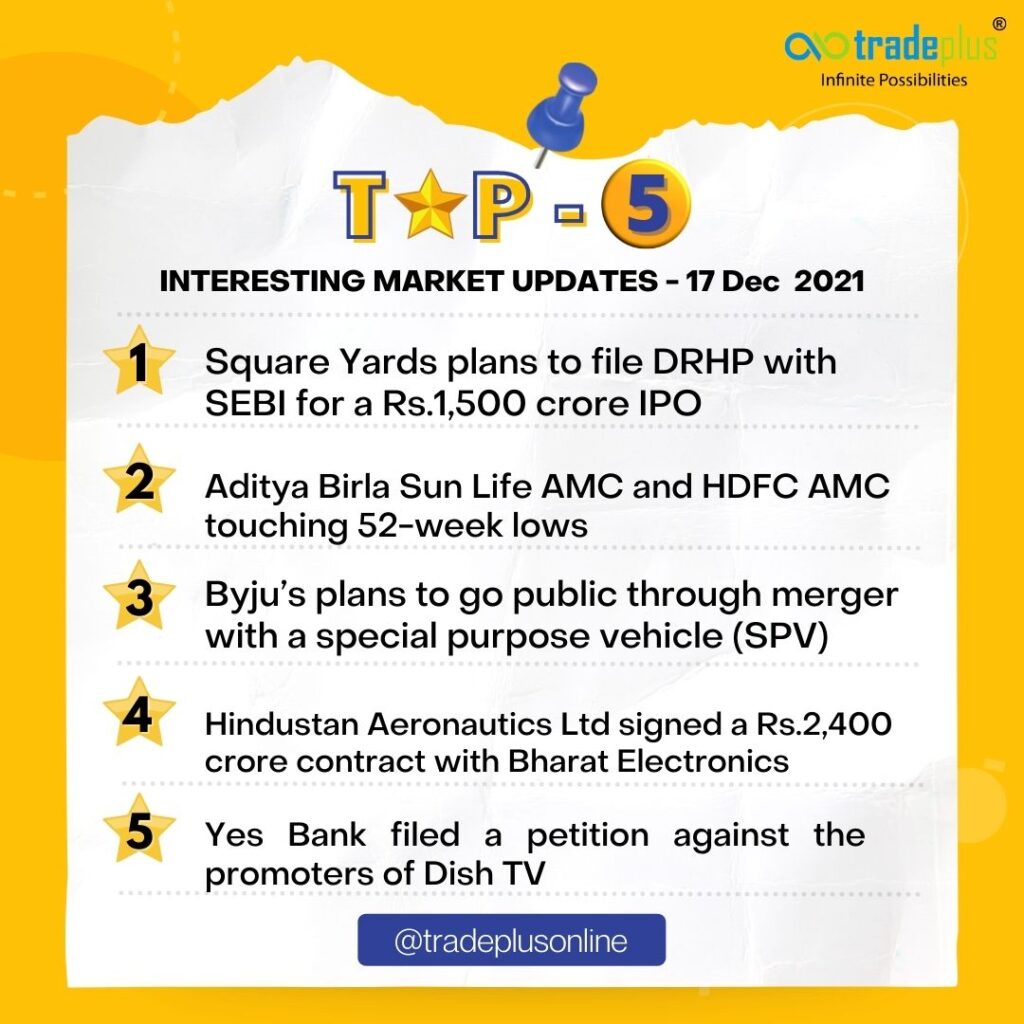 Square Yards plans to file DRHP with SEBI for a Rs.1,500 crore IPO

Square Yards, one of India’s foremost PropTech firms, plans to file DRHP with SEBI for a Rs.1,500 crore IPO. The IPO will be a mix of fresh issues and an offer for sale. So far, the company has raised $125 million via debt and equity. Some of the key investors in Square Yards include Kae Capital, ADM, Bennett Coleman etc. Square Yards is into property brokerage, home loan brokerage and rental businesses and straddles the entire value chain from prospecting to delivery including post-transaction support and management.

AMC stocks are not having the best of times with Aditya Birla Sun Life AMC and HDFC AMC touching 52-week lows during the week. Both these AMC stocks have underperformed in the last 3 months. HDFC AMC stock price has suffered due to rapid market loss in the last 6 months even as overall mutual fund flows remained robust. Aditya Birla is trading nearly 20% below its IPO price. Mutual fund AMCs are not only facing risk of lower retention, but also up against competition from direct equities as well as insurers.

India’s most valuable EdTech company, Byju’s plans to go public through merger with a special purpose vehicle (SPV) of Churchill Capital. This kind of an arrangement is called a Special Purpose Acquisition Company or SPAC. It is reported that Byju’s would look to raise $4 billion via the IPO at a valuation of $48 billion. Clearly, that size of IPO may not have enough demand in India, especially considering that Byju’s is a loss making entity. However, Byju’s is totally open to the idea of doing an India IPO also next year.

Hindustan Aeronautics Ltd (HAL) signed a Rs.2,400 crore contract with Bharat Electronics for development and supply of 20 types of systems for LCA (Light Combat Aircraft) Tejas Mk1A program. This 5-year contract will extend from 2023 to 2028. It is a major step towards indigenization of defence procurement. The deal entails the supply of critical avionics, Line Replaceable Units (LRUs), flight control computers and night flying LRUs. The order for supply of systems for 83 Tejas fighter fleet will be designed by the DRDO.

Yes Bank filed a petition in a Mumbai court against the promoters of Dish TV. Yes Bank is apprehensive that Dish TV promoters may again bring a lawsuit to limit Yes Bank from voting at Dish TV’s AGM on 30-Dec. The caveat was filed against Subhash Chandra, Jawahar Goel and family members. Apparently, Dish TV promoters had approached several large shareholders to sign a petition alleging that the bank was acting in a malafide manner to disrupt business at Dish TV. Dish TV postponed its AGM thrice in the past.

RateGain share price falls 14% on debut; should you sell, buy or hold? Here’s what analysts suggest