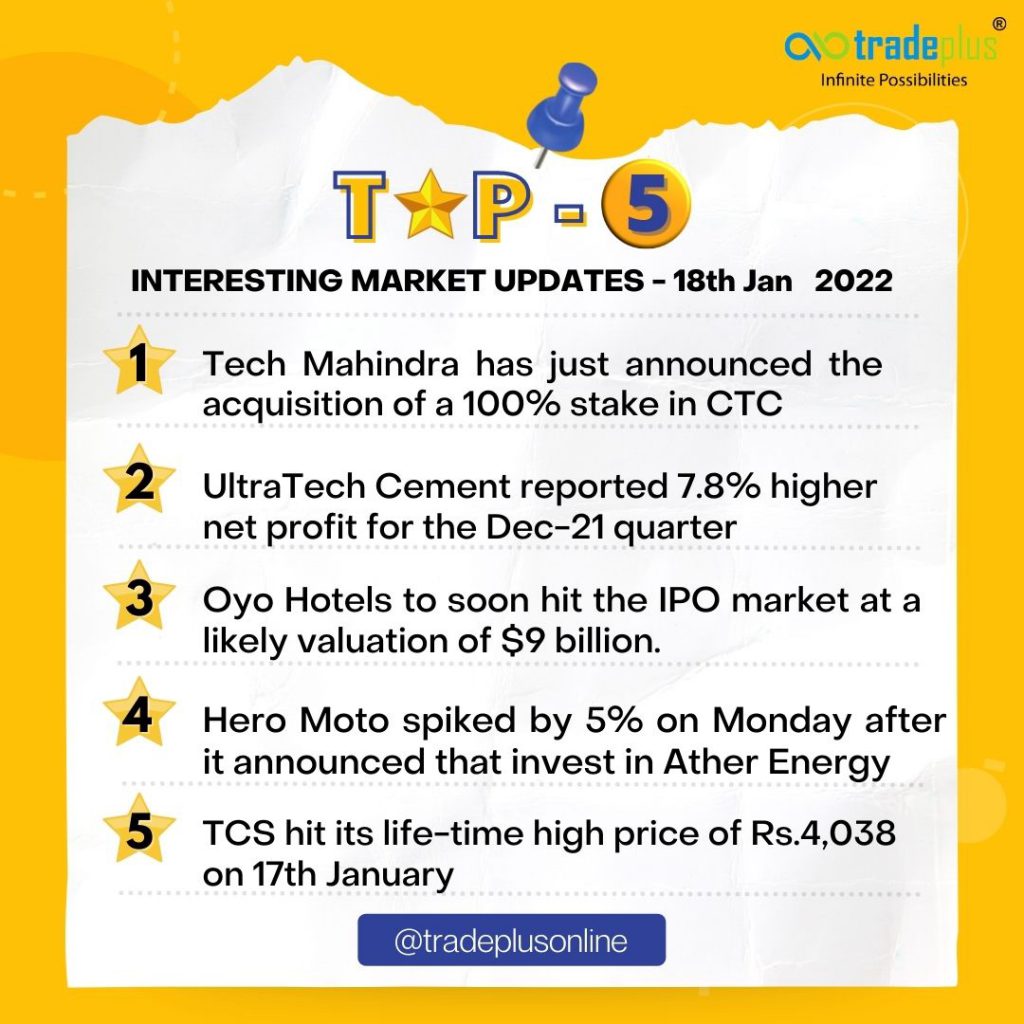 Tech Mahindra has just announced the acquisition of a 100% stake in CTC for EUR 330 million. That is roughly equivalent to Rs.2,800 crore at the current exchange rates between the Euro and the INR. The Europe-based Com tec Co IT (CTC) acquisition by Tech Mahindra is its biggest acquisition since it bought Satyam way back in 2010. This deal is expected to expand the digital engineering and insurance technology franchise of Tech Mahindra. TECHM has been looking to make a significant mark among top IT companies.

UltraTech Cement, the flagship cement company of the AV Birla group, reported 7.8% higher net profit for the Dec-21 quarter at Rs.1,708 crore. The profit boost came on the back of tax credits including writeback of earlier tax provisions and MAT credits. Interest cost also halved in the quarter after the company repaid loans worth Rs.3,459 crore during the quarter. Net sales for the quarter were up 5.8% at Rs.12,985 crore. Operating profits fell in the quarter due to a sharp 33% spike in power and fuel costs

Oyo Hotels to soon hit the IPO market at a likely valuation of $9 billion.

Oyo may have struggled during the pandemic but it is expected to soon hit the IPO market at a likely valuation of $9 billion. Oyo is backed by Softbank of Japan and the roadshows are expected to commence once the regulatory approvals are through. Oyo had scaled valuations of $10 billion in 2019 but the COVID pandemic has not been too kind to contact-intensive sectors like hotels, travel and tourism. That dented Oyo’s performance. The IPO may offer a 15% discount to woo investors. IPO will largely be via fresh issue.

After a long silence, Hero Moto spiked by 5% on Monday after it announced that the company will invest Rs.420 crore in Ather Energy. Ather designs, manufactures and services electric automobiles and charging infrastructure. This is likely to be a big boost to the EV plans of Hero Moto as the valuations of Hero Moto have been lagging Bajaj Auto by a huge margin. Hero Motor already held 34.8% in Ather Energy before the current investment. Hero Moto stock has fallen by 16% in last 1 year, compared to 25% rally in Nifty.

TCS hit its life-time high price of Rs.4,038 on 17th January. Its Q3 results faced some pressure on operating margins but growth in top line and bottom line continued to be impressive. With this latest rally, the market cap of TCS has crossed Rs.15 trillion for the first time in its history. It may be recollected that TCS had also announced a Rs.18,000 crore buyback of shares. Reliance market cap is still about 15% higher than that of TCS. In Q3, TCS saw strong traction in cloud, connected enterprises and product innovation